The new band, recent gigs in NYC and teaching at Siena Jazz

It's always a surprise when you think things are going a certain way and then it turns out different from what you expected. I felt like this after my last hit at 55bar. I've been leading a fare amount this year but I haven't felt that I've been presenting my music at its best.  So it was refreshing to play to a packed house with my new band. The audience was riveted throughout the set and gave us a standing ovation afterwards. I love this band! They're tight but not uptight. Loose but not sloppy. We'll be recording our next gig at Cornelia St. Cafe so i hope for a similar crowd that night to cheer us on. 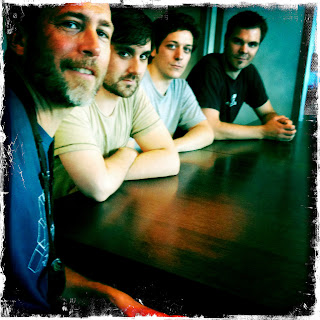 MB, Landon Knoblock, Greg Ritchie and Michael Bates
I had so many rewarding shows this past week. Last weekend Steven Bernstein had me join his Millennial Territory Orchestra in Nyack. And the next evening Ben Perowsky invited me to play with his Moodswing Orchestra plus rapper TK Wonder at the Tribeca 92St Y. We followed that up opening for Raphael Sadiq at Central Park Summerstage. TK has the youthful optimism and old school charm that I miss in so much hip hop today. She has amazing rhymes and her time is incredible. Ben commented on how her phrasing reminded him of Sonny Rollins. 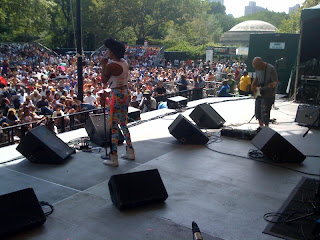 
I was sent a link of the Lounge Lizards that are up on youtube. With Bryan Carrott, Oren Bloewdow, Jane Scarpantoni, Steven Bernstein, Calvin Weston, Billy Martin, Miki Navazio and of course John Lurie leading. I think John was proud to get some serious music across while still having a lot of fun.

Next week I start teaching at Siena Jazz where i hope to pass on some of the amazing information I learned during my tenure in the Lizards. I can see the look of bewilderment already when i try to explain to them what 'fake jazz' is!

But first - this thursday - I'm at the Brooklyn Public Library to play some pure swing with guitarist Matt Munisteri. There's a dance instructor included for this so feel free to come down and shake your thang.
Posted by michael blake at 07:07 1 comment: