I'm going to finish up the 'Weirdest Gigs' list another time. Right now I must share photos, clips and stories from Zambia where my brother Paul and his partner Sitali were recently married. Afterwards we took a trip South to Livingstone to experience Africa at it's best.

In consideration of the immense poverty and callenges facing it, this is a good time for Zambia and its people which founded it's independence in 1964. We were there for independece day. The copper belt -which it once relied on (along with a impressive rail network) - isn't producing the same revenue it once had and so there is more development now in education (Lusaka hosts a large University) and the presevation of it's natural resouces. Tourism is big business. Zambians practice free elections, have a proud history of democracy and enjoy spectacular natural wonders, most famous of all is Victoria Falls (shared w Zimbabwe), the mighty Zambezi river and incredible wildlife which is protected and extremely accesible. I would know as on our first night in Livingstone me, my bro and some friends were treated to an exciting taxi ride at night on a dirt road through a family of elephants. The driver said it was important not to surprise them, then he turned on his lights and gunned it, narrowly missing the calf and running off the road. If he had made an error in judgment (since when was driving between a baby elephant and it's parents a sign of good judgement?) then we surely would have been made into puree. So glad our kids and mother weren't along for that ride. But I did admire our drivers tenacity for adventure and putting his and his passengers lives on the line. We never got as close to an elephant after that but we did feel the ground shake as a herd of them came running towards us a few days later while on safari. That safari driver turned around quite suddenly so we assumed they were coming after us. This was an amazing sight - to see them run! - and to think we may be trampled at any moment only added to the thrill.


After we rounded a bend in the road I got some other footage of this one towing the rear.

The wedding was in Lusaka October 22nd. in a stunning Anglican church. I won't talk too much about the wedding because that really is Paul and Sitali's story to tell. But I will say that I almost laid an egg when I left my soprano sax - which i was to play at the ceremony with the RINGS inside the case - in the taxi that took us to the church! Our Mum deserves kudos for keeping her cool and helping me from totally freaking out. Thankfully I was able to get someone from the church to ring the lodge, who rang the dispatch, who rang the driver, who saw the sax case in the back of his taxi but apparently did not feel it necessary to return it to it's rightful owner until given permission. After some appropriate tipping everything was simpatico. Somehow, though on the brink of collapse everything worked out fine. That's how a lot of things seem to go in Zambia: friendly folks politely wait for someone else to give them approval so stuff is often done in a delicate and thoughtful yet painstaking slow manner. For ex. watching the staff at the Livingstone lodge prepare toast was like a scene from Fawlty Towers. There's a lack of training that is kind of quaint and people are so sincere and well meaning one never gets too worked about it. Best to surrender and enjoy the long waits by reading and drinking a fine Castle lager. Although in the tradition of the Brits I drank Gin and Tonics....refreshing!


After the wedding we flew to Livingstone. It was a small plane and a bumpy decent which the kids loved. On the day we arrived we took a river safari on the Zambezi River - on the African Queen no less - where we enjoyed the view and the open bar!

The next day we went to Victoria Falls which really was an amazing experience for all of us. Although it was extremely hot (tempertures averaged 100degrees) we took in as much as possible. 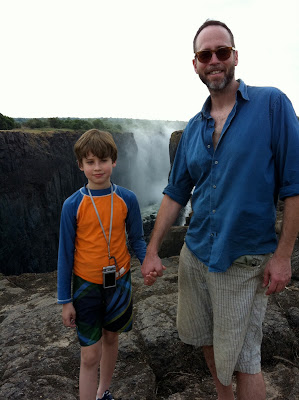 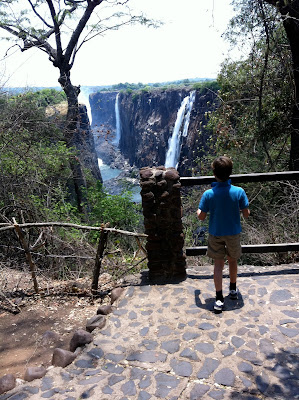 Our greatest adventure still lay ahead of us: A safari through the bush in Mosi-oa-Tunya National Park!