Bassist and composer Peter Scherr has just released a CD I played tenor on called Son of August. It also features his brother Tony and Brad Shepik on guitars and Michael Sarin on drums. Pete is a terrific composer and an empathetic and focused bassist. His rock tinged album is contemporary instrumental music at its best. Check it out at CD Baby!
http://www.cdbaby.com/cd/PeterScherr
Posted by michael blake at 05:32 No comments:

Ever since i was a kid I had a strange relationship with my birthday. Most of the time they went off well but - i think it was my 8th - when there was that defining one where i laughed so hard i barfed all over the table. My brother took the fall but in fact it was our neighbor who laughed with his mouth wide open and with such exuberance that it got me over excited. Paul was singing the theme to a radio ad made big at the time for it's resonance, 'Dick Irwin, what a great great guy!', written about a used car dealer with 'great chevy/olds buys'. Well I didn't hurl at any other bdays but they weren't as much fun as they were supposed to be. My 40th was a highlight - can't believe it was 6 years ago! - when all of my friends came to prospect pk for a picnic. I think we assembled a terrific cross section of friends and family. I had a bday in jamaica where they wrote 'Happy Birthday Elizabeth!' on the cake. She ordered the cake so they must have been really stoned while putting it together. My mom got me a tape recorded one year when i was about 11 and i loved the 'Sound of Music' so i played that a lot. When we saw it in the theater i was mesmerized. I'm not the slightest bit daunted by this or it's resonance in the gay community. It speaks to people. Primarily sappy white people. But there is a new version and I'm part of it, so check this out: Next week we'll be at Joe's Pub to perform Peter Kieswalter's new arrangements of this classic. Rogers and Hammerstein's estate have permitted him to modernize it and it's soulful and strong and refreshing. Come on down June 1 (7:30 and 9:30) to hear the Brooklyn Rundfunk Orchetrata.
Posted by michael blake at 09:49 No comments:

Trio Sante at the Bar Next Door

Scott Neumann has organized this reunion of a trio that was formed almost 20 years(!) ago for a 2 week run in Neuchatel, Switzerland. It's really fun to play with these great musicians again. Hear the sound of Scott exclaiming the wonder of Mt Eiger "5000 feet of vertical rock!", feel the french host crush my hand with his iron grip (after a week I got him back) and relish in Ben Allison's realization that he can eat salmon! And oo la la, the ice cream we ate that day by the lake. Such good memories.


Friday, May 14th Sets at 7pm and 9pm
Trio Sante at Bar Next Door , NYC
with Ben Allison- Bass
Scott Neumann- Drums
Posted by michael blake at 13:34 No comments:

After a satisfying tour with Hellbent I arrived in Siena to a chilly town. Only a month before it was sunny and warm. The crappy weather didn't last long though and when the sun came out the light was fantastic. Here's a view of both cathedrals, the tower and the piazza. InJam was fantastic and the faculty, administration and students made for a great hang. Teaching this term was more of a challenge for me. I remember overcoming obstacles when i got seriously into the music and if it wasn't for some ass kicking I'd not have broken free of my bad habits. So, I did some booty thumping of my own. No doubt with the demise of record companies, the challenges of competing in a saturated market and economic uncertainty there's a different challenge ahead for them. But they also have new resources like social networking and digital distribution that opens up new channels. Next week I'm recording with two young lions of the new jazz scene - pianist Giovanni Guidi and trombonist Gianluca Patrella. Also on board are bassist Thomas Morgan and drummer Gerald Cleaver. I'm looking forward to the date and touring with them in 2011. 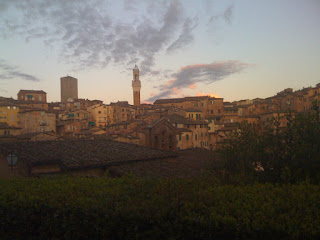 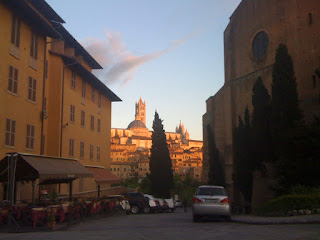 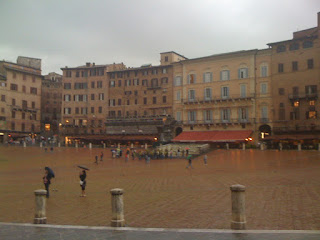 Posted by michael blake at 06:00 No comments:

Howdy Calgary! On to Edmonton 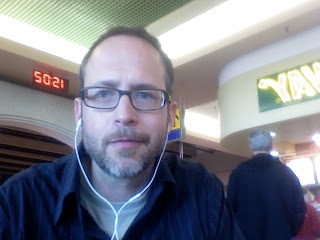 Pretty cool the A&W in this airport has wifi. I just got in a skype with my brother and his family who have arrived safely in london after a long delay caused by the before mentioned volcano. Hooray!
Hellbent made it to Seattle in one piece. Tonight we're at http://www.yardbirdsuite.com/ I really love this band and I'm proud of the new release we're pushing out here. See you here or tomorrow in vancouver for the big show at http://www.capilanou.ca/news-events/performing-arts/season-performances/jazz.html
Posted by michael blake at 14:11 No comments: