Starting Thursday, February 21st I'll be hosting a night at Bizarre Bar in Bushwick, Brooklyn. I'm leading The Bizarre Jazz and Blues Band there every week where we'll be playing some old jazz and blues. Stay tuned for more information.

I had a great time last month touring in Canada with The Variety Hour promoting our CD In the Grand Scheme of Things. We played in Edmonton,  Calgary, Vancouver, Montreal, Ottawa, Toronto and Guelph. Many thanks to everyone along the way, especially Ron Gaskin and the band (Dylan, JP and Chris). I will admit touring there in January when the hockey season starts up (post lockout) is no easy feat. Some rooms were lightly attended but the Ottawa Winter Jazz Fest, Montreal's Casa de Popolo and Toronto's The Rex, among others were fun shows and people came out to hear us. I also had the pleasure of making a few radio shows which were all hosted by people that know their jazz. I even made the cover of The Ottawa Citizen. Great big thanks to The Canada Council for the Arts for their tour support. 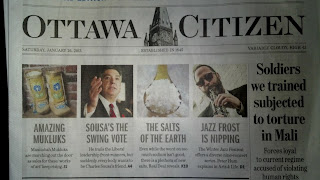 Nest up, I will rerelease my album Elevated online with more of my CD's to come. I also plan to release some unreleased sessions and live performances for download. Elevated has been out of print for quite a while although some copies of the original Knitmedia CD's still exist. I hope with this new venture that I will gain more skills at self promoting and managing my catalogue.

Another bit of news is the CD One from None, recently released on Fresh Sounds and colead by bassist Michael Bates and trombonist Samuel Blaser. This marks my debut on this label which has produced hundreds of albums. These guys both write and play their butts off as do their sidemen. Look for a follow up soon to come.