The Georgia Straight on 'Hellbent'

http://www.straight.com/article-320009/vancouver/grooves-thing-michael-blakes-hellbent
Posted by michael blake at 14:23 No comments:

I'm on CBC radio this saturday

http://www.cbc.ca/hotair/
Check out their website for streaming info.
Posted by michael blake at 18:42 No comments:

Land of the Lost

The comedian George Carlin (perhaps the originator of observational humor) once responded to enviromentalists with a grouchy and cynical but painfully accurate statement that we humans are simply visiting earth and should count ourselves lucky to get to crash on mother earth's sofa. I'm paraphrasing, "the planet can shake us off like a dog shakes off fleas". George, it's a shame in te end you turned into such a dark fellow but you were one smart dude.

My brother and his family came to stay in my place while I was away in early April. After a few days visit together on April 14 they got prepped to come home to London when news of a volcanic ash cloud interrupted their plans. While their 6 yr old daughter was already homesick and her parents eager to be home and back to work, they had to resolve they would have an extended holiday. As it turns out the weather has been beautiful and despite the homesickness we've had a great week. Especially nice for me to get these extra days with my niece.

I feel for my family, friends and colleages whose tours and travel plans led to lost income, cancelled concerts and caused an insurmountable amount of stress. It could have been me! You gotta acknowledge that our planet can kick serious butt. And this is the 'little' volcano.
Hey mighty earth can you chill out now for a bit?
Posted by michael blake at 10:05 No comments: 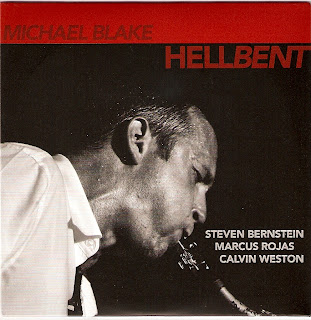 I'm proud to announce the release of my latest CD Hellbent. The recording captures some of New York City's finest contemporary jazz artists at their very best. Joining me are Steven Bernstein (trumpet), Marcus Rojas (tuba) and G. Calvin Weston (drums). Hear the entire 2007 Vancouver concert and buy the first release on Michael's new 'Label of Love'. Available from Michael's website and soon to be released on CD Baby, iTunes and other digital distributors.
Posted by michael blake at 14:47 No comments:

I'm back in NYC. I'll be setting up a slide show with pictures from Menorca and Italy. I had a wonderful time with old and new friends in Siena. I wanted to post  this picture of myself with the great Marshall Allen who performed at the Calagonone festival in Sardinia last summer. I was there with Ben Allison's Band. Guitarist Steve Cardenas took this photo. We grooved on this rap for days:

"Hit that jive jack.
Put it in your pocket 'til i get back.
Going to outer space as fast as I can.
Ain't got time to shake your hand."

We both enjoyed the music, raps, choreography and the magical experience of the Arkestra. Marshall's calm and strength is so present,  his devotion to music, his timeless surrender and brilliant musicianship was amazing. When the world seems scary (like when hooded worshippers silently march on passover), terrorists plots unravel and all seems too dark to bare, I find solace in these bright moments. Hey, if Marshall can do it...why can't I? So thanks to all for a great week in Europe. Many thanks to Tommasso Cappellato, Ludmilla Faccenda, Jacopo Guidi, SienaJazz, the students and faculty. I love to teach and hear music through the ears of my students when they realize something profound and beautiful and feel the force of nature. Home is where the heart is.
Posted by michael blake at 04:17 No comments:

...with Marshall Allen in Sardegna 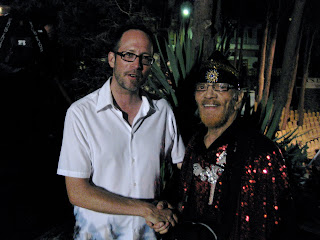 Posted by michael blake at 04:01 No comments: 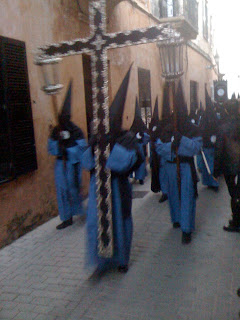 Posted by michael blake at 17:00 No comments:

I flew into CDG in Paris fully intending to make my transfer in 1 smooth step but as usual the airport through me off balance. I met a friendly jazz singer Deborah Davis - on her way to Bierut - and drank too much wine with dinner but I made it to Barcelona without any problem and then arrived in Menorca completely under slept and groggy. Ah...what a nap i would take here. But first I drank the local gin w tapas and got a taste of the island. Tommy and Co arrived soon after i awoke and we ate more tapas and i came back to my room ready to get some serious sleep, wake early and take advantage of the facilities the hotel offered. And i did. I swam, took a sauna, and steamed myself into a stupor of sorts. By the time we were at sound check I felt I had been on holiday for a week.

We ate at a local restaurant on the upscale side and tried to get back before the processional for Good Friday began. I had seen the rehearsal and it was quite something. At the front are a large line of worshippers, hooded and robed, looking very much like a certain clan in the US. Especially because of the pointy hoods and crosses. Man they looked scary with only the eye sockets cut out of those creepy hoods. The Jesus came next, carried high on the shoulders of the 'pallbearers' (?) and a band played something we recognized from Sketches of Spain. Right then when the entire street was silent and somber as you can imagine the promoter suggested we walk along and then cut through the procession. I immediately refused to do this out of respect to the processional, their silent onlookers and because I was feeling the mood and I wanted to experience it from the same viewpoint as the locals. But I had to go, and that was that, so I scurried along with the mourners and tried not to appear as embarrassed as I felt. Awkward...

We played a nice concert (on Tommaso's Birthday!) for a receptive and friendly crowd of about 200. The band was sounding great in that old room. I'll let you know when the best bits are up on youtube.

All my musician friends should know Veuling Airlines is anti-musician. They restrict carry on for musical instruments to - get this - flute, clarinet, trumpet, violin and viola. It was hairy for a minute because this purser was going to refuse to let me bring my horn on board. Even though it was under the restricted measurements and smaller than most everyone's luggage. The captain finally revealed she was looking for excuses to keep me from bringing my horn because i wasn't polite. Come on, I'm Canadian! I can't not be polite. Thanks to Tommy for keeping his cool as I was getting rather put off with this woman and I felt she was seriously over stepping her authority. I was assertive but I don't think it made any sense so I was dismissive and just took my seat and stored my horn. Was that rude of me? Well they got the last word. As we began our decent, Kenny G blasted out from the speakers.

Hey I'm in Padua now and I must see the Giotto frescoes and tell my son about them. He's an active artist and loves a book about Giotto. And I want to see them for myself! I love visiting Tommy and his girlfriend Emi and we always have a great time. Today was no exception and Emi cooked some serious Pasta Fagioli for dinner. Tomorrow I've been invited to join them with his family for Easter lunch. Mangiamo!

Starting on Wednesday I'm teaching in Siena. It'll be nice to work with the students and hang with my boys Ben Allison and Ben Perowsky who are also on the faculty for InJam in April and May.
Posted by michael blake at 11:25 No comments: