The Year of the Dragon starts early for me!

NewYear's has landed and for me it came in at 55bar in NYC's west village with one of my favorite bands: The Brooklyn Boogaloo Blowout! Now that I see the chinese new year coming along I'm even more excited becasue I am a dragon and it is our year! This one kicks off with a reunion of one of my favorite works "Kingdom of Champa". Recorded by Scotty Hard, produced by Teo Macero, this critically acclaimed debut album put me on the map. The story, the vibe and the musicianship all adds up to a hair raising journey. The suite will be played at Milano's Manzoni Theater on Sunday, January 22nd at 11am as part of their Appertivo in Concert series. Already 500 tickets sold and counting...!
http://www.youtube.com/watch?v=49Vwe3hs-NA&context=C3bd10a8ADOEgsToPDskKNQi_KudlspcuNJP-Lm9H8


Last weekend my band Hellbent participated in NYC's Winterjazz Festival. This event, co-produced by Brice Rosenbloom and Adam Schatz, showcases a wide variety of creative music. The NY Times review emphasizes that this is not a corporate sponsored event and in fact the only plug was for Six Point brewery in Brooklyn where a group of musicians (including myself) infused the signature jazz brew. So here we have a festival devoted to non commercial music, employing hundreds of musicians (jazz, free, improvisors, rock, hiphop) supported by a large audience who get it all for a reasonably priced ticket. I admit the music business is a mess, the recording industry is a mess and music intellectual property rights/distribution is a huge mess BUT we musicians are doing it, promoters and directors are doing it and people are going out to hear it! Makes me proud. You can see how much in this picture. 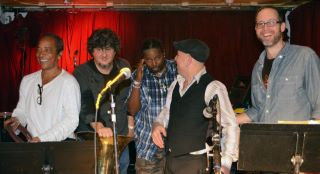 
There are a few other dates happening early this year (you can peruse my Upcoming Gigs list for more info) but a highlight will certainly be Ben Allison's Band at Zankel Hall on February 3rd at 10pm. I have played on probably half a dozen of Ben's albums and we have been close friends and collaborators for 2 decades so I am honored to participate in this, our Carnegie Hall debut!


Also in 2012 my new CD "The Variety Hour" will be released on Songlines Recordings. I am so happy with the results of this album! The band is based in Vancouver (a town ripe with talent) featuring new compositions played by Dylan Ven der Schyff (drums), JP Carter (tpt) and Chris Gestrin (rhodes/moog). I'll be sending out more info as we get closer to a release date.


Thank you all for your support!
Posted by michael blake at 08:08 No comments: