Cutting to the chase. Top 10 Weirdest Gigs Ever

5. 1987, working with an Elvis impersonator out of Surrey, BC. This guy had pipes! And was a super nice dude. Every week I'd drive out to the burbs to this pub to play with him and his band. They rocked and I had a great time. About 3 weeks into it I noticed he would always disappear on breaks and one day I noticed him in the parking lot sitting in a Honda Civic. Just the sight of a guy dressed like 70's Elvis in a little car was weird enough. Then he invited me in to partake in a little of BC's finest export. I didn't want  to seem rude so I partook and then went into a a 'Big Lebowski-ish' dream sequence while Elvis talked to me about stuff, in his Honda Civic.
Posted by michael blake at 06:49 No comments:

The Top 10 Weirdest Gigs I Ever Played

10. My first gig as a professional Union card carrying member was for the Sikh Parade in Vancouver, Canada. I was 19 years old. We were hired to lead the parade but why they asked for a jazz band I'll never know. As we took off for the route in the back of a pick up truck it became clear people were as surprised as we were. Turbaned and Saried parade goers lined the street and we crawled by playing... St Thomas. Not exactly a Raga. Perhaps a few jazz classics were also explored. I believe I thought John Coltrane's India was appropriate but I can't remember if we played it. After about 2 hrs we stopped for a while and the bassist and I were desperate to pee so we put down our instruments and ducked into the closest diner. When we returned the parade had commensed and we couldn't even see the front so we had to run to catch up with our friends. They were on the floor laughing while we were out of breath and sweating with anxiety. Well at least I was! It was my first 'real' gig and I didn't want to blow it. I believe the band was with Ken Lister (bass), Ron Samworth (gtr and leader) and there was a drummer too. Now I'm sure Ron would have better sense to hire a brass band instead.
Posted by michael blake at 10:14 No comments:

Ever since I was a kid I loved watching TV. I started out watching the classic 70's sitcoms like MTM, All In the Family, Bob Newhart and MASH. When i was about 10 we lived with my Grandparents for a bit and my Grandpa set up a big comfy chair in the basement (in the storage room) with a b&w TV so he could watch what he wanted without me bothering him. Oh the joys I had eating pepperroni sticks, cheesies, and drinking way to much OJ while watching classic crap like Happy Days and Laverne and Shirley. I could also watch pretty much whatever I wanted and sometimes - if i could stay up late enough - the odd program would be broadcast in which I would get to see (oh joy for a pubescent lad) breasts! Sometimes there was also B movie violence and cool stuff that the Canadian censors would miss.

Recently I think 30Rock and a few other shows like The Office and Parks and Recreation have come up with some pretty funny stuff but nothing has really grabbed me like Louis CK's new show Louis. 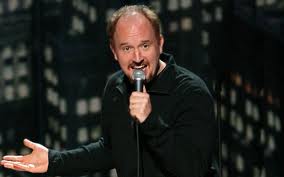 About a year ago I watched his standup special and laughed alot. OK there's some gross stuff and as with most comedians he is pretty crude. He is also incredibly honest and revealing about things in life that are hard to swallow. But in line with one of my favorite comedians of all time - George Carlin - there's an intelligence and bitter snap that really captures the frustrations of life while tickling the funny bone. Like him, I miss my kids when I'm on the road but I never have enough work....etc. It's all so close to home. The guy hit the BULLSEYE with me.

The thing about the show I really dig is that it is so NYC. For ex. the episode Subway/Pamela in which at the beginning he captures a few moments in the subway - the beauty and the beast - and then he ties that same experience into a skit in which he confesses his love for his friend Pamela who shoots him down. Then - on a whim  after a very awkward spell - she invites him to take a bath. But he is so caught up in feeling bad from being shot down he misses the invitation and totally blows any chance at hooking up with this woman, who he really loves. It is a really funny yet heartwrenching true to life story and some of the best TV comedy I've seen in a long time. The scenes are highlighted with good music - mostly jazz - and it's thrown in, not just to add lightness but to frame the scenes. Unlike Sienfeld I actually like the characters on this show and respect Louis' efforts to rise above his failures and find contentment despite being a somewhat broken man. Without loosing its edge it still has heart and it is also smart. Impressive for a one man show as Louis is both writer and director.

This article in the NY Times seems pretty right on to me. Check it out on FX, Hulu or rent/stream it on Netflix.
Posted by michael blake at 16:08 No comments: