The year got off to an interesting and challenging start for me. I was asked to fill in for the brilliant multi-instrumentalist/composer Peter Apfelbaum in Steven Bernstein's Hot 9 Band. This group contains the front line of his own Millenial Territory Orchestra, a long surviving band of brilliant characters who manage to both keep one foot in the past and another in the future while playing Steven's vibrant arrnagements in the present. Steven's new band has been backing up the truly amazing pianist Henry Butler. I had the pleasure of performing with them in front of a capacity crowd last fall at BRIC. Earlier this month at Jazz Standard Steven and Co kicked off the New Year with a week long stint before recording with the great New Oleans master. It was a thrill for me to sink my teeth into this music right before going to New Orleans myself. Not to mention that it also meant wokring with many of old friends (Doug Wieselman, Charlie Burnham, Curtis Fowlkes, Erik Lawrence, Matt Munisteri) and new friends Donald Edwards, Herlin Riley and Reginald Veal.

This experience was just what I could wish for a few weeks before premiering my new work 'Contrasts in Individualism' with my group World Time Zone. A few recollections from NoLa are obviously worth discussing. This video of clarentist is the best example I can share of just how deep the music is down there. Doreen Ketchens is screaming the blues through that clarinet with such power and intent that she might change the world for the better in one chorus. In fact a street artist pointed out that, "Down here a horn can save someones life". Now that's what I want to hear! In NoLa music not only provides meaning and connects locals with a sense of New Orleans history but it can also change the lives of anyone lucky and open enough to listen. You don't see it so well in this video but there's a young girl at the drums (around 12yrs old I think) and the drummer is sitting next to her on a break. She's keeping time and along the way he's pointing to different parts of the drum kit and teaching her on the spot what is the right thing to do. She switches to hi-hat for the sousaphone solo then at the end goes around the kit and chokes the cymbal at the end. I was really inspired to see this type of conduction happening ON THE STREET and it made me realize what Butch Morris's conduction was an extention of this technique. On the job training! 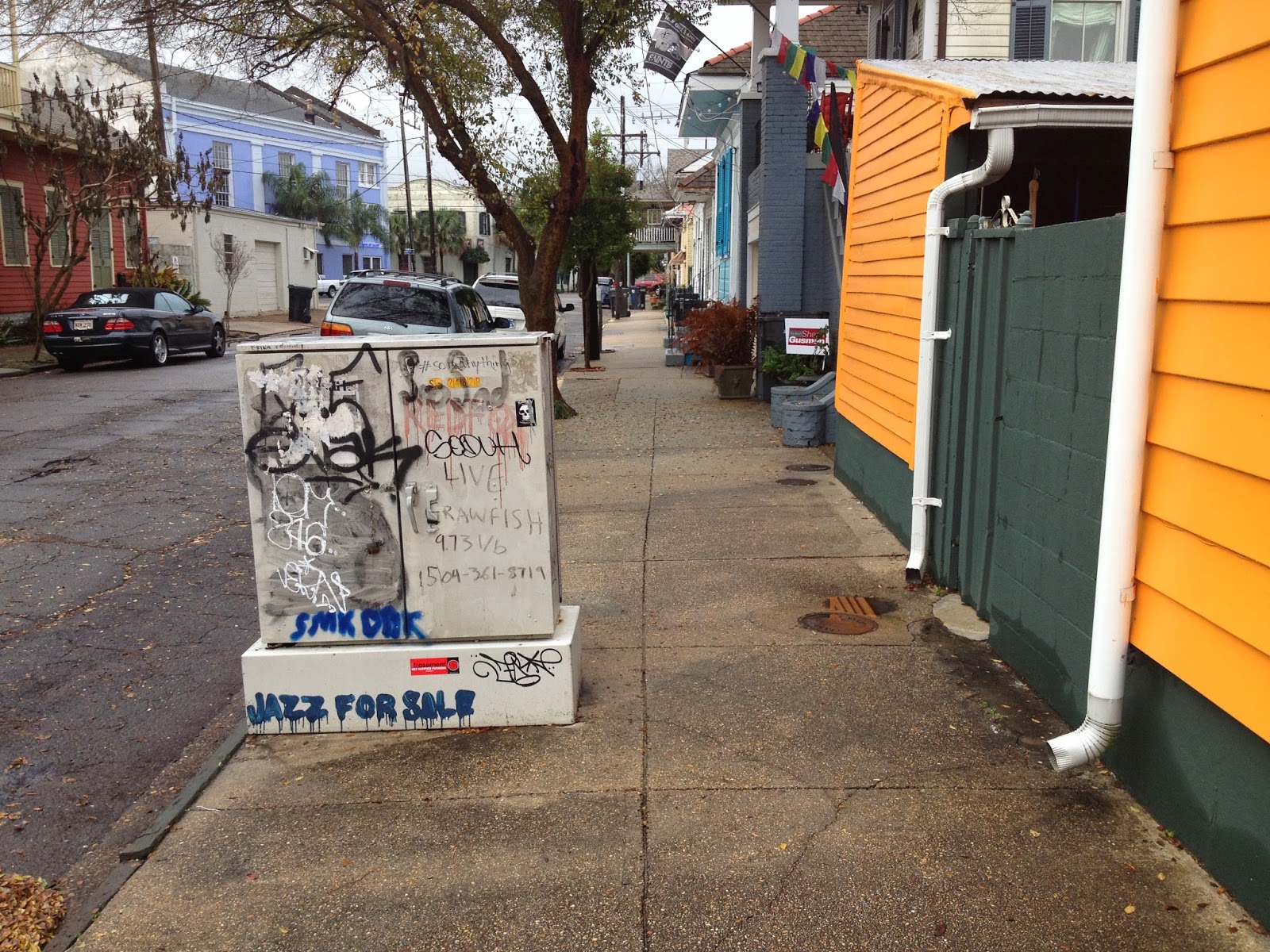 Lester Young
Lester grew up on the road but he was born in Algiers LA, a suberb of New Orleans. Ethan Iverson's blog Do the Math contains one of the best resources on 'classic' Lester Young performances I've ever seen compiled. Made even sweeter by Lee Konitz's comments and insights, together they should be able to turn every jazz lover into a 'Presophile' and anyone who already loves Lester will be in jazz heaven. Thanks to him I'm able to reference the famous early solos and use the samples he has so diligently transcribed.

My fascination with Pres began when my jazz history teacher played the famous small group session recordings of Count Basie ie Shoehine Boy and Lady Be Good solos. Plenty has been written expounding the genius of these gems but there are a few others that are equally sublime and one version of Lady Be Good is rather prophetic. In fact this solo inspired Ethan to go on his quest to uncover the mystery of Young's work, made even more interesing considering that critic have said this solo is a wasted effort. I agree with Ethan and believe this is the gateway to improvised music or 'free jazz'' in that Lester uses a chromatic rather than diatonic apporach to this solo. It's weird and wonderful in every way. The transcription is mandatory reading for any doubters. Check out the chromatic leading tones at bars 8-12! And then at the bridge, in a surprising burst of bravura, he rides a C major 7 arpeggio 5 times and then continues that phrase over the I chord (F > D7).  I love the lovely flourish at the end which is truly the icing on the cake.

A key moment of understanding of Lester's genius has to be this single chorus on the blues Fine and Mellow recorded on The Sound of Jazz for TV in the 50's. It captures him with fellow tenor giants Ben Wesbster and Coleman Hawkins. As good as they both are here, it's Pres's melancholy and achingly lyrical solo that stands out. Billie seems especially entranced by his vibe. It's almost a lost art, this way of developing a musical statement through melodic improvising.


Coleman Hawkins
The first time I heard Coleman Hawkins was on an album with Earl Hines that my father had bought as part of an incredible jazz collection that was sold before I came into my own. It's a live album from the 60's and he is swinging hard as ever. I started on the clarinet and I was immediately intrigued by Pee Wee Russell who my Dad always raved about after reading Whitney Balliet's essays on him in The New Yorker. I also liked Goodman, DeFranco, Guiffre and Bigard but for some reason Pee Wee was my man. Another standout was the New Orleans native Alvin Batiste who at the time (1980's) was one of the few clarinetists playing fusion. He appeared on a Billy Cobham album or two. Anyway, Pee Wee and Hawkins recorded together with famed trombonist Glenn Miller back in 1929 along with Red McKenzie on 'comb'. It's fascinating to compare these solos and hear the evolution from 1929 - 1963! Hawkin's solo on If I Could Be with you (One hour Tonight) from both periods are glorious in their own right. The big difference is in the phrasing and how relaxed his lines ahad become compared to '29. Might that be some of Lester's cool influencing Hawkin's own sensibility? The later solo was one of the first tenor solos I cherished and the entire album 'Jazz Reunion' is a gem. I transcribed Hawkin's passionate solo from All Too Soon off of this album and it still gives me goose bumps.

In Closing
While walking along Royal St a came upon a music store that had my first reed brand in stock - Rico Regular. I had been trying to find the best sound possible for this new music and I wanted to go back to my vintage set up and a cane reed. On a whim I bought a few for kicks and once back home I put one on my mouthpiece and gave it a blow. It was like an old friend came home to visit and I think I'm going to ask that old friend to stay a while because it all fits together now; Contrasts in Individualism is the culmination of 30 years of playing, working and studying music on the tenor saxophone. I'd like to thank all the musicians who have influenced and helped me along the way! Good music is timeless and I feel some relief knowing that the struggle and hardship these great jazz pioneers had to endure really does carry on for generations. New Orleans has shown me another side of America that every musician should discover. As a matter of fact I bumped into a pair of Danish hornmen on their way home after spending 2 weeks hanging out there. It was immediately apparent that they (like me) were aware that they had just spent some time in a sort of musicians fairytale.

We premiered the work last Thursday at Kitano in NYC. There was a full house and the music came pouring out just as I had hoped it might. It was especially nice (that word always sounds so uncool) to be reviewed by Ralph Miriello. His article is up on the Huffington Post! Ben Allison, Frank Kimbrough and Rudy Royston brought exactly what I needed to pull it off, so many thanks all round.