On May 23rd, 1914, the steamship Komagata Maru arrived in Vancouver from Hong Kong carrying 376 passengers from Punjab, India. Only 24 passengers were allowed to disembark and after several months under lock down, the ship was forced back to India by exlusionists. Several years ago, upon learning that my Great Grand Uncle, then Conservative MP H.H. Stevens, was responsible for the detainment and eventual deportation of the passengers aboard the Kamagata Maru, I felt the urge to compose a work meant as a gesture of atonement and reparation for what was at the time a sad and regretful moment in Canadian history. On the other hand I think H.H. was acting in the best interest of 'white' Caandians and doing what his constituants asked of him. This doesn't mean I am embracing the connection with my relative nor am I trying to vilify him. In the words of Adam Gopnik, “Historical criticism, which is ostensibly about trying to understand things as they were seen then, too often spends its time hectoring the dead about not having seen things as we do now.” The music is resonating with a sense of adventure which suits the spirit behind any person who is willing to leave ones home in search of a good life in a new land. All of us who have done the same can relate to that experience and essentially that's what this music is about.


Featuring an expanded instrumentation of my Vancouver group The Variety Hour, I'm proud to announce that I'll be premiering the piece at the TD Vancouver International Jazz Festival on June 22nd. Many thanks to both Coastal Jazz and Blues and Barking Sphinx Perfromance Societies for their support in the creation of this new work! 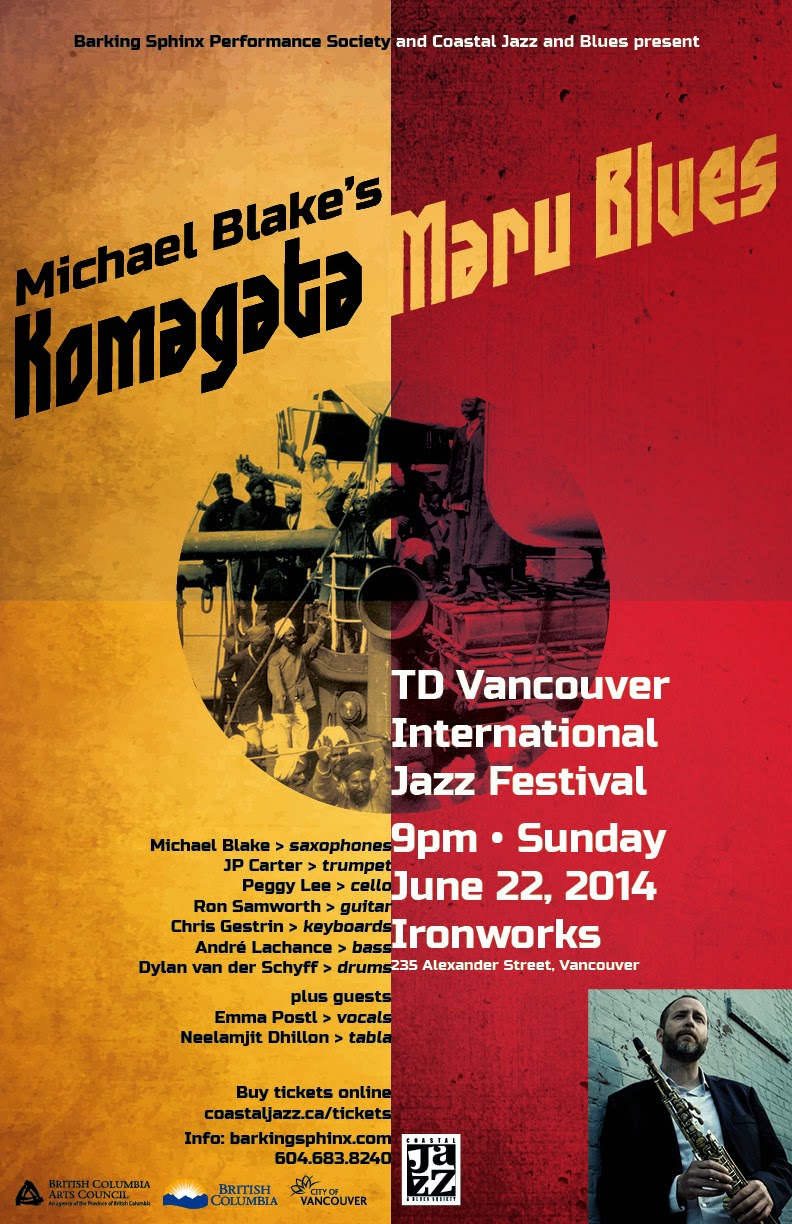 After discovering that fellow Vancouverite and musician Neelamjit Dhillon was also writing a piece commemorating the 100th Anniversary of the Komagata Maru incident, I rethought about how to approach the work. We chatted a bit on Facebook about the coincidence and spoke about each other's intentions. We both seemed to be heading in a similar direction. But once I knew where Neel was going and after further discussion with Barking Sphinx director Dylan van der Schyff,  I decided to take on a different perspective and rather than write music solely about the Komagata Maru I would treat the work like a series of musical 'essays' about assimilation and identity. This was a difficult subject matter to work with and I didn't want  to add insult to injury by sloppily fusing Indian music into my own work. Knowing that Neel had a much better knowledge and cultural right to express that side of the story helped me to dig down into my own thoughts and feelings about the immigrant experience. I'm honored that Neelamjit will be joining us as a special guest on tablas.

The great free jazz saxophonist Albert Ayler once said, "Music is the healing force of the universe." Because I've chosen to work within the structures of jazz I think the art from and it's history serve as an excellent metaphor for acceptance, social democracy and believing in building a better society. After all I've spent most of my life playing a music that I assimilated. In my heart I feel that jazz is a universal music but it was built on the courage, genius and vision of African Americans. As a matter of fact at the time of the Komagata Maru incident a young Louis Armstrong started cutting his teeth on the streets of New Orleans playing what was to become jazz. After an art form is claimed outside of the culture responsible for its very existence, does it loose vitality or meaning? Is there a disconnect to its very source? As far as jazz pertains, when only whites were the first 'interpreters' this was a pretty common argument but it didn't take long for jazz to break loose from the confines of being a solely American music; as new sounds blended in from Cuba and Brazil and other cultures began to inject new influences into the music. For decades now jazz has become even more of an International music with leading players from South Asia, Israel, Europe and Latin America - and even Canada! - contributing new ideas and pushing the art form forward. And so I believe it is the same within a democracy, that is, when laws are designed to protect all of the people. Sadly at the root of the Komagata Maru there was a serious abuse of power led by H.H. Stevens; thwarting the efforts of anti exclusionist Gurdit Singh and reining in an era of discord that lasts to this day.

To me what the Komagata Maru incident makes me feel is akin to what I hear in the blues. I also hear that wail in the most socially assertive and progressive sound of what is known as free jazz. My ear and the affects of the blues was exponential in my early development. Naturally I thought it best to work within my element as that is where the title comes in and what the work means to me.

I've travelled a lot and through observation I find there are always common denominators in how different societies experience both intolerance and acceptance. Earlier works of mine touch on the 'fish out of water' story (Kingdom of Champa) and another was inspired by the pioneer spirit of early European settlers in BC (Amor de Cosmos). The music is all instrumental so the meaning behind the concept is really up to the listener to decode. This is the great thing about jazz. And what better way to express my/our respect for the victims of the Komagata Maru then to let their voices be heard through the spirits of sound waves. Waves seem play a big part in much of my music.

For those interested in learning more about the Komagata Maru incident, this is an excellent documentary by Ali Kazimi.

Recently I participated in a CBC radio special on the Komagata Maru incident that is availble for stereaming here. Anyone visiting Vancouver this summer should visit the Maritime Museum and see their marvelous exhibit . Unfotunately the link appears to be dead???! Another is at The Mueum of Vancouver and just out of the city limits is another exhibit at The Surrey Museum.